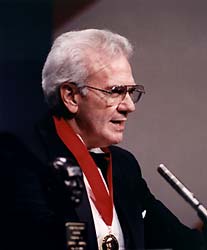 The late Ernest Boyer was a hugely influential voice in higher education policy during the latter part of the 20th century. He was the chancellor of the giant State University of New York (SUNY) system, before becoming the U.S. commissioner of education (a position that later was changed to “secretary”); he ended his career as the president of the Carnegie Foundation for the Advancement of Teaching.

Boyer was very comfortable taking on the higher education establishment and calling out its weaknesses as he perceived them. For example, he believed that American higher education began to lose its way after WW-II, when the National Science Foundation was established (1950) and the National Institutes of Health were greatly expanded, making federal research dollars available, in increasingly larger amounts, to campus-based researchers. Boyer was visibly concerned that the growing emphasis on university-based research was coming at the expense of the historic emphasis on high-quality undergraduate education.